I will happily admit that I am a proud alumna of Indiana University in Bloomington, Indiana and that all of my notions about the campus and town are heavily skewed. I see the entire landscape through rosy lenses, and I wouldn't have it any other way.

It wasn't until I was showing my beloved Glaux around campus, though, that I noticed that Aphrodite had made her beautiful mark on my alma mater long before I ever arrived there. In fact, I'm persuaded now to see the campus and town as places sacred to her, honored as she is by the local residents. (Even the very name of the town -- Bloomington -- calls to mind her flowery and garden epithets.) 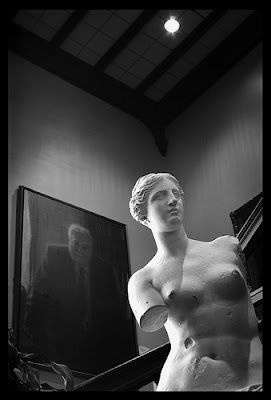 The first picture was taken in the hotel lobby of the Indiana Memorial Union. I was on the Board of Directors for the IMU in 1996, during my undergrad career, and I can boast for the school that ours is the world's largest student union all under one roof. This replica of the Aphrodite of Melos (Venus di Milo) is larger than life and stands in the crook of the stairs, surrounded by plants and backed by the university's beloved former chancellor, Herman B. Wells. 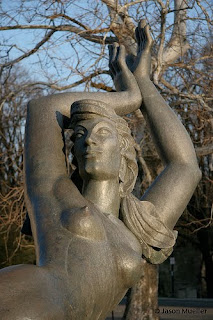 This next set of pictures shows the sculptural fountain at the heart of campus. Named "Showalter Fountain" in honor of the donor who funded it, this is a depiction of the Birth of Aphrodite. She is surrounded by fish, and the circle of this particular sanctuary is bounded by the Auditorium, the Lilly Library and Museum of Art.

I'm taking classes again through IU in preparation for my MA & PhD in Religious Studies. My application to the program is due by the end of this semester, and I pray almost non-stop to my beloved Kypris to see me accepted. I intend to study once more on this campus that I love, surrounded by images of her, as I research and write about the Lady of Love. What better place could I have chosen?
Posted by Laurelei at 8:19 PM 1 comment:

Oh, 'tis the summer of being perpetually a half-step behind. =) We have reviewed the entries for the Asteria Books Agon, and we have conclusively determined the winners in each category for which we had submissions.

First, though, we would like to thank all of the entrants who participated by sharing their work with us and with the greater Hellenic Polytheist community. This contest was an opportunity to cross some of the boundaries that we often feel within our community and look at what it is that draws us to Hellenismos. In this case, each contestant shared his or her vision of the "Beauty of Hellenismos," and we believe that we see within the collective works a very rounded picture of what makes this religion beautiful indeed.

Short Story
1st place -- "Out of His Body" by Robert Davis

Each of our 1st Place winners will receive free entrance to the Midwest Hellenic Fest (a three-day Hellenismos-focused festival retreat). This year, all our entrants will receive hard copies of The Agon Literary Review 2010 compilation.


Our Top 3 Agon Entrants will receive cash prizes as an honorarium of their work. These awards aren't hefty, but they are heartfelt laurels. May the fair-haired Muses continue to smile upon you all!

We'll be posting excerpts soon, and the full compilation (available in both print and e-book formats) will be available within the week.
Posted by Laurelei at 4:49 PM 2 comments:

Today is the day on which I celebrate the Vinalia Rustica, a holiday celebrated in Rome as the establishment of the first temple of Venus. Elle Hull, on the Aphrodite's Flowers blog, provides a lovely discussion of the significance of this day.

Having just spent a significant amount of time tending to a very garden-state shrine in honor of our lady, I rather agree with her conclusions that Aphrodite has deep and abiding connections to the land. Gardens in particular. In fact, Ginette Paris discusses this aspect of Aphrodite at some length in her book Pagan Meditations in a section in which she discusses the many guises of Aphrodite of the Gardens. This is an Aphrodite of cultivated beauty that springs from the green growing wildness of the land.

As such, I can see the connection inherent between Bacchus and Venus, Dionysos and Aphrodite. Elle talks about the name Vinalia Rustica. Why a celebration venerating the vine and Aphrodite? A good question! And one I don't have a solid answer for, but only gut reactions. These two are mates in several ways, as Aphrodite is mated with other lovers. And the wine of Dionysos offers an ecstasy and pleasure that is related, I think, to the beauty and pleasure and love of Aphrodite.

I'm the kind of person that often likes having more questions than answers, and I'm glad to have these questions today as I celebrate my lady.

May her blessings be upon all of us.
Posted by Laurelei at 5:57 PM 2 comments:

Last Friday evening, Glaux and I headed to Our Haven for some retreat time. She had some serious inner work that she wanted to contemplate, and I had some serious physical plane work that needed tending. (Well, my inner work was going to happen while I did physical toil, so I got a double-header.) Specifically, I absolutely HAD to pull weeds from Aphrodite's shrine and re-set the arbor that we had put in place for her. (It had fallen in the wind and storms, mainly because it needed to be affixed more permanently to the land.) 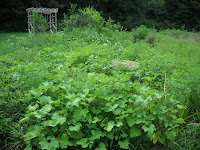 Glaux and I are among a smallish group of people that I would call "stewards" of Our Haven. Our spouse, Iron Dragon, is definitely on that list, as well. In fact, there is hardly a structure, a standing stone or any major project that he wasn't involved in building/placing. Minimal though that stewardship core is, I had anticipated more help in keeping the weeds out of the Great Rite Spiral in which Aphrodite's shrine sits. But ... people are busy, and the folks who live on the land are over-extended in all their maintenance duties. So, my beloved space looked like this after just two months of my time away. 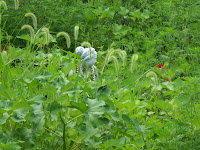 I could practically hear Aphrodite admonishing me that she is not Aphrodite of Jungle or the Lady of Weeds. Gardens are great, and some wild spaces can be nice from time to time. But this was ridiculous. At least her roses were thriving. Can you see the little pinpoints of scarlet that she seems to be gazing upon? 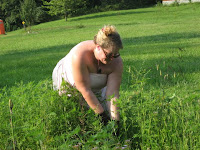 So I tended what was supposed to be her garden. There are Chinese hedgerows planted in a large spiral that encompass the entire space. They were overgrown to the point that nobody but someone very familiar with the space could mow it for fear of running over the smaller of those hedges. My first task, then, was to unbury the boundary hedges. Then, I focused on the shrine surrounding the Goddess. I pulled weeds for seven hours the first night, but I made progress. And Glaux took pictures when she joined me later in the evening. =) 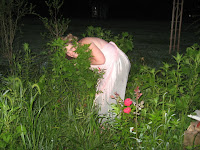 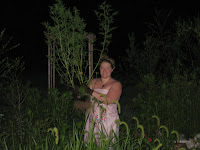 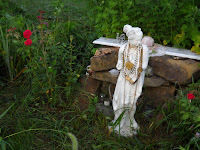 Venus was riding toward the horizon and the sky was dark when I stopped for the night, but I got up early enough the next morning to see that shining morning star at its zenith, and I went back to pulling weeds, dancing in my lady's garden, and getting the arbor back in place. (The posts are in deep and surrounded in concrete this time. It isn't going anywhere.) The work was hot and long, though, and I sweated more than I ever have before. I found that I was useless at manipulating the post-hole diggers. (Too short, I am.) So I made better use of them by pairing them with my umbrella as a shady refuge while I dug the post holes by hand. 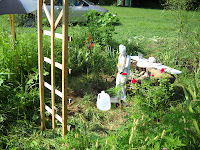 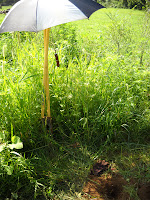 When enough of the weeds we cleared out, one of the Elders of Our Haven (Manelqua) came to my rescue -- riding his trusty lawn tractor and making quick business of the remainder of the weeds. I poured a libation of strawberry mead. 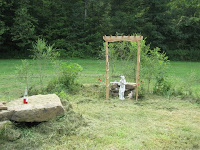 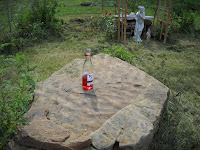 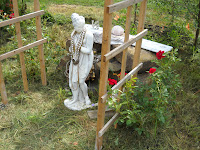 There is more work yet to be done. I'll be out to visit and do maintenance weeding about every two weeks between now and October. Then, I think Iron Dragon, Glaux and I will be putting down some ground cloth and more mulch. (Just the hedgerows have mulch right now.) I'd like to see more flowers. There are irises in the spring, planted by a sister-priestess. they bloomed for the first time this year and were stunning. But I was thinking maybe some day lilies to add bright summery color. And I *think* we have some morning glories that are weaving themselves in among the more established hedges -- particularly right behind the altar.

In any case, it is beautiful, and I thank the foam-born Kyprian who delights in her bath, for giving me the chance to get sweaty and dirty as I worked and danced in her garden.
Posted by Laurelei at 11:10 PM 4 comments: