Did You Miss the Podcast?

I've been on two podcasts in the last couple of months. Did you get to catch them?

Scroll of Thoth -- episode 13 "Babalon in Black"
April 9, 2014
"This episode James, Colleen and Shade OfRoses speak with Laurelei and Natalie Black about the Babalon Rising Festival, Liber Qayin, Polyamory, being a priestess of Aphrodite, and the Witches’ goetia."


Voices of the Sacred Feminine -- Sacred Courtesans
June 18, 2014
"Returning to the show we have Laurelei Black, author, independent scholar and practitioner devoted to Aphrodite, sharing with us her findings on Sacred Courtesans, past and present.  Laurelei is interested in how we apply the ancient wisdom and service to modern thought and practice.  She will give us insight into interviews she's conducted with modern-day courtesans as she's delved into what training they've undergone, what rexources or support they have (and lack) and what their service looks like in a practical sense."

Email ThisBlogThis!Share to TwitterShare to FacebookShare to Pinterest
Labels: podcast

I have FOUR appearances scheduled over the next month and a half, and I would really love to see  you at one (or all) of them.

I'm organizing this one, but I am also on schedule to present. If you're into Celtic or Norse spirituality you will LOVE this event, but so will those with no particular ties to the Celtic or Nordic diaspora. We have rituals, workshops, games, and contests to delight and interest everyone.

The line-up for this event is incredible, and I'm excited to be a part of this work. Don't see me as a LHP type? Depends on your definition, I suppose. We'll be getting into that in another blog post. SOON.

Lucifer-Azazel-Qayin: The Devil at the Crossroads  -- The scapegoat of God, the bringer of enlightenment, the master of magic and the forge. Join Laurelei Black, co-founder of the American Folkloric Witchcraft tradition, in an exploration of the mythos and symbolism of Lucifer, Azazel, and Qayin. American Folkloric Witchcraft sees these names as three monikers of the same entity. Explore the mark of Qayin and the red thread that links witches to the potent and often misrepresented Man in Black -- the Golden Man, the Red God.

Siren, Succubus, Seductress: The Devil's Bride  -- Come close. Closer. Let me whisper a secret in your ear. It's a Mystery, my love. Are you ready? The God of alchemy, of magic, of enlightenment, of witchcraft has a Bride -- and she is the Lady of Love (and sacrifice). She is the golden star from whose iron he crafts the blade. She is the whore to whom he tells his secrets. Of old, she was Venus, Ishtar, Aphrodite -- the Morning and Evening Star. Her daughters are the sexy and seductive women of magic -- witches, succubi, sirens. Enticing, alluring, powerful ... and dangerous. Join me (Laurelei Black) in an exploration of the mythological waters that bore these temptresses and a discussion of the experience and application of being such a woman in the world of magic.

Come join a band of witches in the woods of Southern Indiana for a Lammas fest! This is another that I'm organizing and also presenting two classes. We welcome witches from all Traditions to celebrate the Red Day with us, to learn about practical and esoteric magic, and perform transformative rituals in the limestone hills of Southern Indiana.

The Witch's Familiar  -- Witches have a long and storied relationship with the Unseen World and with spirits of many types, abilities, and personalities. Those spirits with whom we are most familiar have a special place in our lives and our magic. This discussion will cover historical familiars -- including those found within the Legion and those named during witch trials -- as well as the contact, care, and keeping of familiars for modern witches.

Flying Ointment and Sabbat Wine -- Learn the art of herbal astral travel. Come and discuss with us the historical ways in which the Witches of old flew to the Sabbat at the Mountain, leaving their bodies safe at home -- or how they went out into the night as hares. Laurelei  will discuss the theory and history behind the very toxic plant poisons used in the past and also explore some safe (but effective) non-toxic alternatives for modern spirit flight.

This is a completely secular -- and very practical -- event designed to educate and inspire folks about homesteading, self-sufficiency, and traditional arts/skills. Whether you just want to learn to rely a little less on the big box stores, reduce your carbon footprint by incorporating alternative energy into your home, or genuinely hope to prepare for the Zombie Apocalypse, this fest is for you! 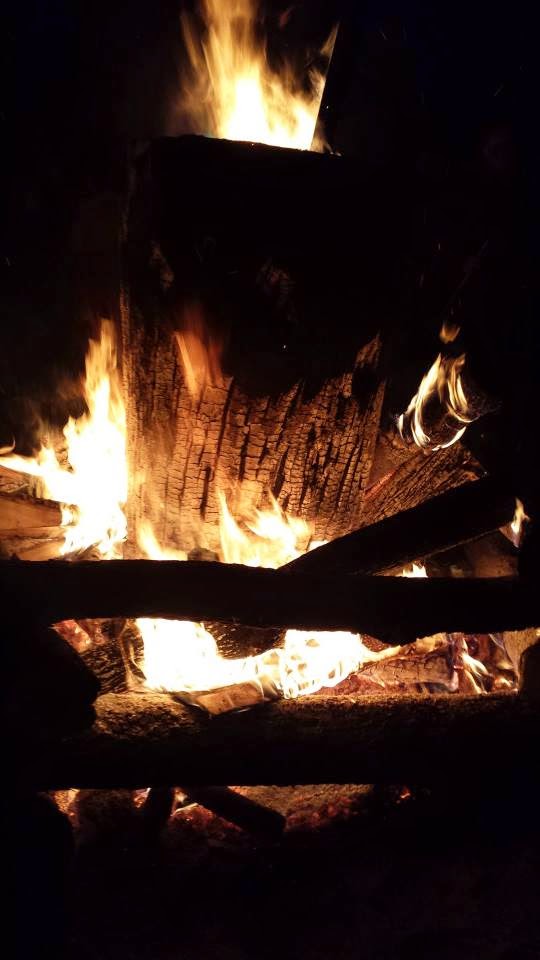 Since the Babalon Rising Festival concluded just a few days ago, I've been trying to process all of the energy and awe that I felt. I'm not sure that I am capable of putting into words what I have been feeling, but I will try for fear that all sense of coherence about those days of magic will drift away.

This was the 8th iteration of the festival, and it is probably significant to know that we took a year off last year. It was a hard year. A painful and lonely year. We (the Directors of the fest -- my partners) had a dramatic and public falling out with our event venue and home (Our Haven Nature Sanctuary). I won't go into the details here. I'm healing from those hurts, and dwelling on them only hurts more. That pain is only really relevant in the sense that it provides a backdrop for the Chaos that we experienced during 2013.

So, a lonely, painful, sad, and isolated year.

For those who don't know, Babalon Rising has been working a magical formula for the last nine years. We have been taking the serpent's path up the Tree of Life. Last year coincided with Da'ath, the Abyss. And boy was it!

THIS year, though, brought us out of the Abyss and into Binah, Understanding. It is the City of Pyramids, the Great Sea. It is the sphere of Babalon herself. *sighpurr*

Babalon Rising was the first event to take place at Midian, the event grounds established by my partners and I (and about 10 of our close friends). We closed on the land -- 25 heavily wooded acres in a reclaimed limestone quarry near Bedford, Indiana) on the first weekend in April. We had 8 weeks to take this beautiful but abused piece of land, clean her up, love her up, build her up a little, and open the gates for the festival. In those eight weeks, we:

* picked up around 100 garbage bags full of trash and debris left on the site by partiers and dumpers
* pulled about 80 pounds of broken glass out of the dirt where bottles, tv screens and car windshields had been broken and shot during target practice
* cut roads though the woods
* gravelled said roads
* laid sand for the main fire circle
* painted twenty or so abandoned tires to be used as raised flower beds
* installed electricity
* dug a well (with some of the tastiest water you can imagine!)
* ran plumbing and electricity to needed points
* built a stage on a solid limestone shelf (and broke a jackhammer doing it!)
* poured concrete pads for the kitchen and main event pavilion
* bought a kitchen full of equipment
* cleared over 200 campsites
* built 6 shower stalls and ran hot/cold water to 5 of them
* cleared a 2 acre parking lot
* laid stonework for a patio
* installed raised, stone-ringed flower beds

There's more, I know, but I think this is plenty to mention. On any given work weekend, there were about 20-30 of us on the land, including kids. Everyone worked so hard. We worked right up until the opening of Babalon Rising. We were so excited and nervous.

Attendees started arriving, and the reunions with old friends was like a salve to my soul. Connecting with new friends was exhilarating. We got so much positive feedback!

It rained all day during our set-up, which meant that all the lovely gravel got eaten by mud. So did a couple of cars. Eek. But then the skies cleared and the land drained and dried. (Thanks, rock quarry! You have amazing drainage!)

Workshops and rituals started on Thursday, and I noticed the weirdest thing. Everyone was asleep. BR might have a reputation as a party festival, but it also has some notoriety for being filled with excellent presentations ALL day, on THREE separate tracks, for THREE full days. Our shaded camping, though, lulled our attendees into sweet, long slumber.

The workshops were as amazing as ever. I spent all of my time in my own Scarlet Track. Since 2009, I have helped organize the sacred sexuality and sex magick (Scarlet) track at the festival. This year, I led an introductory talk on Western Sacred Sexuality; a group discussion on boundaries, Will, and consent; and a Sapphic Qadishti Circle (ladies-only sacred touch). All three were wonderful experiences for me. I have to say I particularly loved the Sapphic Qadhisti Circle. It has been a long time since I took a hands-on approach to my work as a Sacred Whore, and I realized at the hands (and lips and nails) of those women how much I missed it. (More on that in another post, I think.)

I also got to attend a workshop on Gender, Misogyny, and Occultism as led by Jason Winslade, which I thought was an excellent exploration of some of the gender issues within the Western esoteric traditions. AND ... my own coven sister, Sara Grey, help temple space in service to Lilith. This year marks the first time since I held Aphrodite temple that such a working has been done at BR. She is a talented priestess and vessel, and my interaction with the Grey Goddess on Friday evening was  profound.

Historically, I don't get to attend much of the fire and party at this festival. My duties as Responsible Director Type have me going to bed exhausted and waking up early. Not this year. Don't get me wrong, I was tied. But I needed my dance time, my flirt time, my soak in the fire time. And I took it. I took every minute of it. I think I only got 6 hours of sleep between Wednesday night and Sunday morning. My body started to rebel by the end, but I did something I've never done before:  I stayed up until morning Resh on Sunday morning. In the 6 years I've been with the festival, I had yet to say dawn Resh.

The Feast of the Beast ritual was perfect! My own beloved Owlie wrote it (with a little help from me -- but only a little). It drew from Alan Moore's Promethea and Jack Parson's Babalon working. I was one of the four Queens depicted in the Tarot. The Queen of Cups, specifically. I'm interested to see how that plays out for me this year.

My time at the fire sustained me this year. While I was only able to have a little conversation through the day with friends both old and new, I was able to indulge in esoteric (and also some purely flirtatious) conversations and interactions at night. I got the most heavenly back rub I think I've ever had. I participated in a looooong (and frankly badass) chant. I got my feet rubbed by a world-class musician. (Come to think of it, "rubbing Laurelei" seems to have been a theme for me. It's a trend I would love to see continue into Chokmah.) I sat in the sand and talked until dawn. I watched people and loved people and connected with people all weekend.

If I start to say "thank you" to all the people who made my weekend amazing, I think I'll have to name literally everyone there. =) From the Midian directors, to the barter staff, to the presenters and musicians, down to every single attendee -- THANK YOU! You have no idea how meaningful and significant this year's Babalon Rising was for me on a personal level.
Posted by Laurelei at 5:25 AM No comments: