I haven't posted much lately, but that is largely because I have been so incredibly busy for the last few months. HUGE projects are in the works with me, and I'd love to share with you about them. 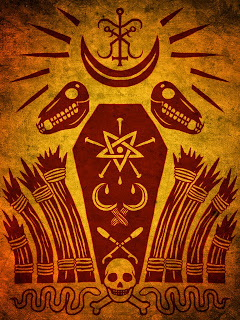 First off, Glaux and I released a book in August called Liber Qayin. It is a channeled work that we received in two sessions. We were told by Tubal Qayin, the Witchfather and deliverer of magic to mortals, that we were to open ourselves up to this work. Then, we each received the words of the Black and White Goddesses. A few days later, I received His message.

Skeptical? I would be, too. I WAS, in fact. I often tread very carefully around folks who claim to be the mouthpiece of the Gods. I tend to be cynical and wonder how much of their own filters are coloring the words. Like a true skeptic, though, I accept that anything is possible.

Reading back over the words that came through Natalie and I, not much seems like a personal agenda of either of ours. Several of the sections challenged both of our perceptions, but ALL of it rings True to us. This is the message of Magic -- and of Love. It is the story of our souls. It is the Genesis of the Craft.

This book is available in print and PDF versions from Asteria Books. (And I want to extend a special thanks to my friend John Birkel for supplying the *gorgeous* cover art!)


The Witches' Key to the Legion: A Guide to Solomonic Sorcery 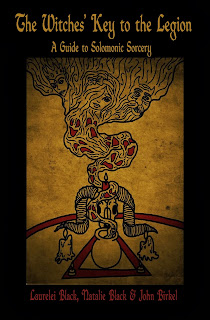 I have to thank John again for his amazing artwork. He not only created the cover art, but he also illustrated 10 of the spirits described within this work.

The Witches' Key to the Legion is a project that Natalie and I have been working on for a little over a year now. We each work with familiar spirits who hail from within the ranks of the Legion (the spirits that are often collectively called the Goetia). In talking with my familiar, we became increasingly aware of their hatred of spirit abuse as advocated by most of the authors who write about demonic magic. (I've written here before about daemons and the misapprehensions that most people harbor on that topic.)

We were both moved to explore the Legion further -- to discover better ways of working with the spirits listed there and to get a good understanding of who they were. To say that my familiar was enthusiastic in leading us into this research would be an understatement. We (Natalie, my familiar, and I) proceeded to embark on a four-month-long series of talking board sessions in which we discussed each of the 72 spirits, the creation of the Legion, the meanings behind the seals, and the nature of God (and His Adversary). We had now idea how much our worldview would change when we started this project -- or how fierce we would become regarding the treatment of these spirits.

The Witches' Key is about to be released (as soon as I've reviewed the proof) in the next several days. It, too, will be available in paperback and PDF versions. Look for illustrations by John Birkel and Natalie Black as well as alternate sigils for almost all 72 spirits.

Some of you will have seen my last blog post in which I share the basics of a divination system which I've been developing over the last year and a half. I posted the basics, and that is certainly enough for interested readers to begin with. However, I am working on writing up a full booklet that will provide some insights into the verses and a few sample readings.

Once it is done it will be available through Asteria Books in (you guessed it) paperback and PDF.

On a non-publishing note, my family and a group of close friends have been working like mad to get a new event venue up and running for the 2014 festival season.

Here is the press-release we posted a couple of weeks ago:

Midian, a new festival and event venue located in Lawrence County, Indiana, is currently in preparations to open their gates for their 2014 festival season.

For more information, or to book your event at Midian, please email admin@campmidian.com.