PBP: Epitymbia, or How Aphrodite is a Goddess of Necromancy

Aphrodite, for all intents and purposes, is the very epitome of a White Goddess. She is a a beautiful enchantress, the bestower of love and fecundity. And, in keeping with the simple Mystery stated above, she has a dark shadow -- one that not all who look upon her see. I believe that the Ancients saw it, though, and the proof is in a few of  the epithets they gave her:

I also think it is recounted in her mythos, though we need to pull back the layers just a little (and remember her connections to Inanna-Ishtar and Astarte) in order to discover Aphrodite's connection to the Dead and the Underworld. 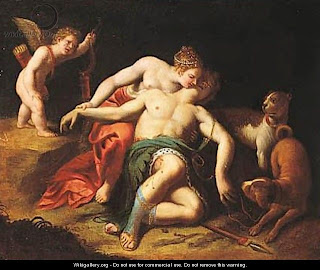 The myth of the dying shepherd is the first that connects Aphrodite to the Underworld, its Queen, and to her Middle Eastern cognates. While the story of Adonis, Aphrodite and Persephone varies in cultural tone and flavor from its Middle Eastern predecessors, there's no denying that Aphrodite and Adonis are the Greek counterparts to Inanna & Damuzi or  Astarte and Tammuz. Indeed, the mourning ritual commenced for Adonis (the Adonia) by all the women of Greece is an exact parallel to the mourning undertaken by the women of Damuzi and Tammuz myths. Also paralleled in both sets of myths are the fact that "arrangements" are made in such a way that the Beloved Man returns to the Goddess for a portion of the year, thus making him a dying and resurrecting God of land.

In the Greek version, Persephone falls in love with the youth, as well -- emphasizing the connection between the Queen of the Underworld and the Starry Goddess. In Sumerian, Babylonian and Phoenician lore, you see, these two Goddesses were sisters. In a sense, they were the light and dark halves of the same coin. In Greek myth, though, this isn't the case. Yet the myths bear out their connection again and again.

Journey to the Underworld

In the Middle Eastern variants, The Starry Goddess makes an Underworld Journey to plead to her dark sister, Queen of the Underworld. It is an important exception to the Greek myths, I think, that this doesn't happen. What *does* happen, however, is that the two Goddesses work in concert on at least two occasions (for Adonis and Psyche) and that they share a number of common symbols and sacred places. Among them are the Cyprus and the pomegranate -- both of which are vastly important to both Goddesses.

But of course the Starry Goddess -- whose "star" (the planet Venus) is both the Evening Star (Hesperus) and the Morning Star (Eosphorus) -- would be connected to underworld journeys. She dips below the horizon, into the west -- always the place of the dead -- and rises again. And if not her, then her lover (Adonis) and her priestess (Psyche) -- those whom she guides.

Psyche was a mortal who was said to be as beautiful as Aphrodite. She was "sacrificed" by her parents and carried on the wind to the palace Eros (Love),  Aphrodite's beloved son. She disobeyed the instruction not to look upon her husband, who then fled. Psyche then sought Aphrodite's help, and the Goddess gave her seemingly unconquerable tasks -- one of which involved an Underworld Journey to retrieve a cask of beauty potion which was kept in the care of Persephone!

I don't believe that Aphrodite was trying to thwart her daughter-in-law, as most people who relay and interpret this myth seem to indicate. I don't at all see Aphrodite as jealous of the girl's beauty or resentful of Psyche's love for Aphrodite's beloved son. On the contrary, I believe she set Psyche upon the Heroine's Journey. She was testing her -- initiating her. At the end of Psyche's tasks, she is made immortal; and I believe it was the worthiness of this immortality that Aphrodite was judging -- and also the worthiness of the girl for her son.

Psyche means "soul" in Greek, so in essence, Aphrodite sent the human spirit on a quest that proved its worthiness of the immortality of the Gods -- and of it's worthiness of all-encompassing Love.

(By the way, if this episode in mythology doesn't illustrate the profound importance of the Love Goddess, I don't know WHAT can!)

Amor Vincit Omnia. Love conquers all things. She is the subduer of war-like Ares, where all others fail. And what about Death? Is Death, whose realm we all must enter, powerful enough to undo the touch of Love? While these myths give us room to speculate -- and are designed to make us do so -- I know that I have my answer. (I bet you can guess what it is.)


Aphrodite Epitymbia and the Necromancer

I call upon my Beloved and Mighty Dead all the time, and Aphrodite Veiled, She of the Tombs, is my guiding star. I approach them in love, respectful of Death's Dark Queen. Aphrodite, her sister in myth and spirit, is a mediator and light. With her, I continue to seek the Light in the Shadows, the Dark in the Light.

Very interesting post. I had never seen or heard those epithets with her before, so I'll definitely be making a note of them.

Your description of the story of Psyche was wonderful, as well as her reasoning. The more I think about it, it really does sound more like a test than spite.

I like the more multi-faceted approach to the mythos. It is information that is not always presented and I appreciate the more wholeistic view on the subject.

Thanks, Albino Bard and Andrew! I appreciate the feedback, and I'm glad this information resonates with you. =)

Beautiful post and very informative. I do so agree very much with all you've said. :)