PBP - F is for Familiars 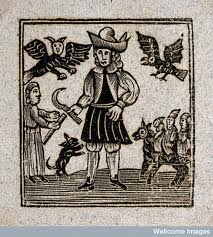 I'm not necessarily talking about your favorite kitty, Miss Witch.

Okay, in one respect, I *could* be talking about your favorite kitty, but let's be really up-front that when a Witch talks about a "spirit known to her" -- a familiar spirit -- that isn't a historical implication of the household cat. In fact, as Judika Illes points out in her massive volume Encyclopedia of Witchcraft, cats weren't even the most likely animals to be a witch's corporeal familiar in the Middle Ages, as the cat wasn't a common household critter at that time. The term "pussycat" most likely referred to the rabbit (Latin "lepus"), an animal that was much more associated with witchcraft, lunar magic, necromancy, and shapeshifting.

Isobel Gowdie's famous confession is said to include the following chant for shapeshifting into a rabbit:

I shall go into a hare,
With sorrow and sych and meickle care;
And I shall go in the Devil's name,
Ay while I come home again.

(sych: such; meickle: great)
To change back, she would say:


Hare, hare, God send thee care.
I am in a hare's likeness now,
But I shall be in a woman's likeness even now.

There's also a famous poem about "The Graveyard Rabbit" which I'll be covering next week, which brings up interesting associations between rabbits, witches, and the dead.

Of course, that isn't to say that your physical (corporeal) familiar can't be a cat -- or a dog, or a turtle, a snake or any other creature with whom you have a working magical relationship. My point is that your being a witch and having Puff or Fido in the house doesn't automatically make Puff or Fido your familiar. 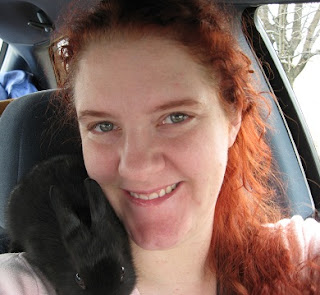 A corporeal familiar is a living animal with whom you have a working, magical relationship. This animal shows an interest and adeptness for the type -- at least, for some types -- of magic you perform. Some familiars love ritual, and they present themselves promptly at the start of every circle and spell. Some are magnificent energy workers, and they'll help you direct healing energy. Natalie's cat, Jinx, does both of these. Hex, on the other hand, prefers to observe and comment upon the making of potions and mixing of herbs. (See, I told you I'm perfectly willing to accept cats as familiars.)

My rabbit George also loves ritual and energy movement, and he takes a very active role in ritual work, when he's part of the circle. On a harness and lead, he will go from one quarter to the next -- at exactly the right time -- and then to the main altar. Fred, my other buns, pays special attention when I'm working with the spirits of the dead.

Most animals like energy, and many animals are willing to help with the healing process in some capacity. As for willingness or talent to be a familiar in magic, you really need to pay attention to the proclivities of the specific animal. They aren't all interested or able, no matter how much you love each other.

Witches didn't just have animals who helped them manifest their magic. Lore and witch trial records (not ALL of which can be complete fabrications) are filled with accounts of witches calling upon familiar spirits to do their bidding.

Nature spirits, angels, demons, magistelli, Deities, the Mighty Dead, the Good People (fairies). There are a host of unseen forces with myriad names. Witches have certainly worked with all of these. (Don't shake your head at the computer screen. Witches most certainly HAVE worked with Angels and Demons. Let's not forget that the word "angel" comes from the Greek ἄγγελος pronounced "angelos", which means messenger. "Demon" also comes from the Greek --  δαίμων pronounced daímōn, meaning nothing more or less than "spirit."  Neither was inherently benevolent, nor was the other malevolent. Can they be? Sure. I bet you can be nasty, too.)

Like most beings, angels and demons are primarily looking out for themselves, but they're willing to make a deal with you. Actually, I think that can be said of ALL non-corporeal spirits. Some are naturally more amiable and inclined to work with you. Some, not so much. A few can be down-right nasty, but don't let their category be the deciding factor. There are more fey that I would recommend avoiding than there are Goetic demons, frankly.

In fact, Paul Huson, in his book Mastering Witchcraft (a classic that I HIGHLY recommend) suggests getting in touch with a particular Goetic demon pretty early in your Craft practice. Natalie and I have long maintained that conjuring demons is a historical part of the craft. We don't recommend doing it lightly or unprepared, by any means. But having a good working relationship with a couple of these spirits is a good thing for a witch.

Maybe it's because I'm a necromancer, as well, but I also advocate reaching out to the Mighty Dead in search of a familiar spirit willing to guide you. This year at Samhain, our coven was blessed by the adoption, of sorts, of a witch from the other side of the veil. We have learned since that time that this is another time-honored tradition. We just stumbled into it. She came to us while we were using the Ouija board, and she has been present for us collectively and individually ever since.

The Unseen World enfolds us, and we Witches walk within it, while maintaining a connection to consensus reality. Our familiar spirits help us navigate and understand the Unseen, for they are a part of that world.


For more information on Familiars, I recommend:

Robin Artisson's series of guest posts (Forgetting Human) on the American Folkloric Witchcraft blog (which covers a great deal more than familiars, and is sooooo worth the read!)
and
Natalie's post on Familiars

Lovely blog, I would love a Dragon for my familiar :)