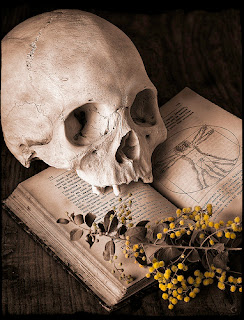 Among the many labels that I give myself, "necromancer" is probably the most surprising for those who don't know my magic very, very well.

Merriam-Webster Online defines necromancy as the "conjuration of the spirits of the dead for purposes of magically revealing the future or influencing the course of events." It is also more generally defined as "magic, sorcery." This latter definition gets translated as "black magic" quite frequently, and a quick look at the etymology of the words in question might clear up why this is.

"nigro-," however, is Latin and means "black," and the term nigromancie was the more common term used in the Middle Ages to denote all of the forbidden magical arts, including the conjuration of spirits.

Glaux and I quite strongly believe that among the work of Witches is the communicating with the Unseen Forces -- the Dead and those Unseen Ones who never lived. I've written a little here about daemons, and I take great comfort, inspiration, knowledge, and wisdom from the Dead and the Daemons with whom I've worked. In the sense that Glaux and I conjure and request magical aid from both sorts of spirits, I suppose we fit both descriptions of necromancers -- conjurers of the Dead and black magicians.

In the same way that Glaux and I each have a couple of Daemons with whom we are particularly familiar (Samagina for me, and Issachar for her), we also have a single Ancestor with whom we work who acts as a tutelary spirit for our coven. She prefers that we call her Zeta, though she had another name in life, and she came to us at Samhain 2011 via the Ouija board. (We LOVE using the talking board as a method of spirit contact.) 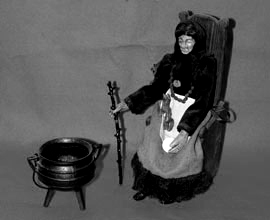 As it turns out, in some parts of the UK, it has long been common practice for covens to be in contact with a departed Witch -- someone who acts as a guide and friend, a mentor if you will, ... or more poetically, as an Ancestor to the coven and its individual members. The skull that sits at the base of the stang (or on it) is thought to house this spirit, and sometimes the coven fashions a doll in the likeness of the Witch.

I'll be covering Zeta in a little more detail when we get to the end of the PBP. She is a fascinating spirit, and she has been extraordinarily helpful and sweet.

So, why did I say it is surprising for folks that I am a necromancer? My Goddess is a giver of Life. She is the embodiment of it. She is fertility and virility, Springtime, hope, and Love. I wear pink and aqua and flowers in my hair. My familiar is a rabbit, the symbol of fecundity and an icon of cuteness. But let's not forget that the rabbit is prey, and she knows of sacrifice and death. My Lady dances across the ocean, in the groves, and amongst the stars; but she also knows the Mysteries of the Underworld. She is the secret initiator, the bright gate-keeper, while her Dark Sister is the Queen of the Dead.

Christian Day has written a book called The Witches' Book of the Dead. I highly recommend it for anyone who feels drawn to the path of the necromancer. It is a fine place to start. In it, he talks about embracing life and celebrating your non-conformity -- that the Dead are drawn to Life! So ... surprise! ... Love (ie, Life) and Death are two sides of the same coin, and work them both in my magic.
Posted by Laurelei at 2:27 AM No comments:

"Melissa" means "bee" in Greek, and to the Ancients, a melissa was a priestess of the Goddess. Of which Goddess exactly, we can't always be certain. Some melissae were dedicated to Demeter, to be certain. Some to Artemis. But some were priestesses of Aphrodite, and there is popular lore that holds that the bee itself is the embodiment of the soul of a priestess of the Goddess of Love -- a happy, productive little maiden continuing to produce the golden nectar of the Gods.

No animal is a better example of the power of community than the bee. Each bee in a hive has a specific function which she will perform even if it means giving her life for the hive.  There are three types of bees: workers, drones, and queens.  The worker bees are the common bees we are most familiar with.  They secrete wax to form combs, and produce honey to feed the hive. Interestingly, only the drones, whose job it is to impregnate and care for the queen, are male. The rest of the rest of the bees -- all of the ones we see -- are female.

Bees communicate by dancing, and those who work with bees will find themselves drawn to dance and rhythm. The bee's dance is indirect relation to the sun in the sky.  Bees are symbolic of solar celebration.

The bee's droning buzzing can be compared to the sounds of otherworldly trance. Its hum is commemorated in many folk names for the creature, including drumbee, drummer, doombledore, hummabee, and humble-dad. In Welsh the word for harp, tellinn, is a truncated version of the word for bee, an-tseillean. This heritage can be traced back as far as Minoan and Mycenaean culture and is evident in the worship of Kybele, the Great Mother, who was honored with drum and cymbal music. In fact, the buzzing of the bee is said to be the voice of the Great Mother herself, and the sounds of drum and cymbal in the worship of Kyebele were intended to imitate her voice.

For more information on the Bee Goddess and her priestesses, read this article.
Posted by Laurelei at 5:59 PM 2 comments: