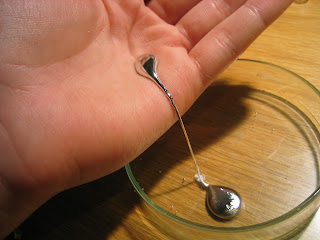 Quicksilver is more commonly called mercury these days, in honor of the Roman God of the same name. It's Latin (scientific) name is Argentum vivum, meaning living silver.

Oh, how interesting, dear readers! I'm not going to go into details about who did this work and when ('cause it's their work, and I don't need the back-lash), but my sweetie and I have some UPG (unverified personal gnosis) about quicksilver being used in the creation of a very powerful egregore.

An egregore, for those unfamiliar with the concept, is a thoughtform, and as such, it can be created by a magician and then fed power/spirit until it becomes a Spirit itself. If enough people work with a thought/spirit, it exists. This is, by one way of thinking, how Gods are made.

So, say you were making an egregor from quicksilver. What would YOU breathe into that being?

There's a watery-ness to this liquid metal already.

It is heavy and dense -- the heaviest of all the natural liquids on Earth.

It is as reflective as a mirror.

It is both a poison and a medicine.

Check out this interesting article for lots of cool facts about the strange physical properties of this liquid metal.

Are you serious about this? This WILL KILL YOU!!!! (Scrunches eyes in utter disbelief at the utter stupidity of such actions.)

I would urge you to read the article, Julie. The picture is just a photo, and has very little to do with the article, other than it being of the same subject. The article is about magical uses of Quicksilver.

Or perhaps you believe that creating an egregore of living silver, as discussed, would cause literal physical death. In which case, I would be curious why you would hold that as a magical belief.