Aphrodite and the Craft 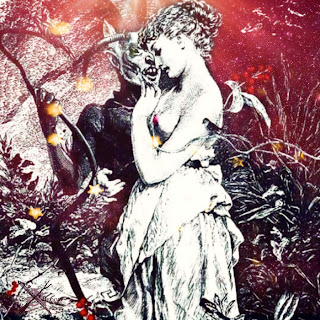 For years now, I have struggled to find a way to balance the two dominant aspects of my spiritual and magical practice -- or rather, how those two pieces are perceived by others. I'm an Aphrodite-Woman (a Priestess, at that), and I am a Witch (and a fairly "loves dead things" type). These work for me. Together -- not as separate ideas. But how? And why am I always keeping them apart in public view?

I discovered myself as a spiritual person, as a magical person, through the Craft -- through Traditional Witchcraft. I was lucky to be right in the thick of 1734-Roebuck-Wyldewood Grove territory when I got my start, hanging out at Raven's Flight in North Hollywood. TLDR: My Craft is not a highly-sanitized neoWiccan eclectic "love-light-roses" sort of confection you might imagine of a person with strong Aphrodite ties. (Actually, if you've read my books on Aphrodite, you know I don't shy away from her dark aspects. She's a fantastic Goddess for helping us confront the Shadow.)

My Craft is Luciferian. It's heretical. And it's baked into my daily life, which is part of why it blends so well with the Aphrodisian gnosis I've had over the years. I live and breathe witchcraft, and Aphrodite showed up for me as part of my Craft training -- or at least during the early stages of it. It was Her standing behind me, empowering me, informing me, guiding me. Her holding up the mirror.

Within Traditional Craft, there are two Great Powers to whom Witches most often give allegiance (or with whom we find ourselves aligned). HIM and HER.

HE is the Witch Father -- the Folkloric Devil (not to be mistaken for the Theological Devil of the Christians), Robin Goodfellow, the Light-Bringer, the Illuminator, Qayin. So many names and titles! (And I get that I might be seriously freaking some of you out right now, but take a look at what I've written about Him elsewhere for more perspective.)

SHE is the Witch Mother -- the Queen of Elphame, the Maiden of the Greenwood, the Devil's Bride, Queen of Heaven and of Hell.

For a great many Witches, Hekate is the face of the Witch Mother. And I get that. I respect that. She is that! There's no denying it.

But ... so is Aphrodite (and Astarte, Ishtar, and Inanna). She is the Morning Star and Evening Star, every bit as much as Lucifer has been. She is Ourania -- "Heavenly." And she has many epithets that link her with death, mourning, darkness, descent, and return -- all emblematic of an Underworld journey. (Her Middle Eastern counterparts, of course, are well-known for their Underworld descent and return, but Aphrodite's associations are obscured. We know she kept a "treasure" there in Persephone's care -- a cask of ointment that conferred deathless, ageless beauty. And we know the rituals and epithets that were documented, which I have written about in Aphrodite's Priestess and Cult of Aphrodite.)

Ishtar/Inanna has, at her core, stories that speak of immense magical power, which the Queen of Heaven gains by charming her (father? brother? uncle? depending on the regional origin of the tale) Enki (after getting him drunk) and convincing him to give her the objects and regalia associated with each type/portion of power/ability. I plan on doing a deeper dive into how Aphrodite's regalia are vestiges of these mes/parsus, at some point. But for now, let me point out that Aphrodite wields some fantastical power, is given objects of incredible power (like her zonai/girdle and that oh-so-famous golden apple), and she is clothed at the hour of her birth in a way that reminds me a great deal of Inanna/Ishtar coming back through the seven gates of the Underworld into the Land of the Living.

All this is to say:

Aphrodite is a Lady of Life and Death. Of Liminality -- between spaces and outside spaces. Of charm and bewitchment in the most classical senses. She is immense and furious as the ocean, and as gentle and soft as a rose petal -- each in turn, and not always when you expect them. For me, hers is the face of Elphame. She is both Light and Dark.

So why work so hard to keep the Craft out of my Aphrodite web-presence (and vice-versa)?

Because for the 20+ years I've been working with her, some people's brains break just a little when I talk about both in the same breath. It happens less on the witchy side, but sometimes it still happens. And a lot of Aphrodisian folks haven't felt ready for conversation. I've gotten a LOT of side-eye from Goddess community and Aphrodite devotees when I mention my blended practice.

So I have cultivated two brands. "Aphrodite's Priestess"/Laurelei Black and "Blade & Broom"/L. Black. But I want to do a little exploring of the intersection of Aphrodite and Craft, because it is there, and I can't be alone. (I wasn't alone when I started writing about working with her in a strictly spiritual context, so I'm sure I'm not alone now that I'm ready to talk about the magic, too.)

Let me know if this is something you're interested in. Or if you're already embracing Aphrodite in your Craft!

Email ThisBlogThis!Share to TwitterShare to FacebookShare to Pinterest
Labels: witchcraft

I would be interested if you wrote more on this topic! Aphrodite is very connected with witchcraft for me as well.